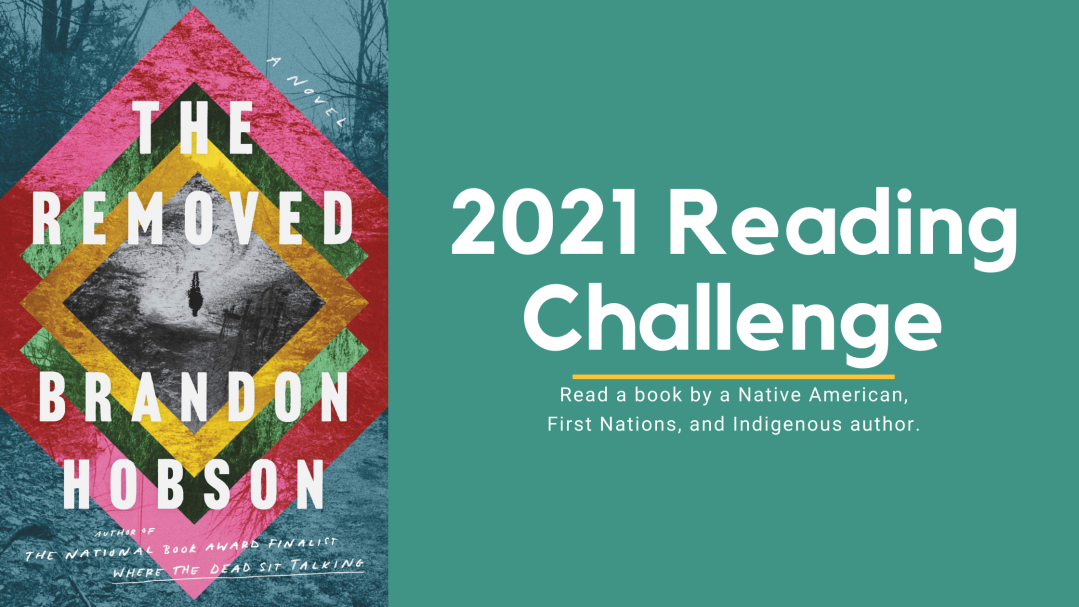 Did you know that Waterloo, NE sits on Omaha and Otoe (Jiwere) ancestral lands? These books by Native American, First Nations, and Indigenous authors are important stories not only about racial justice, but about joy and magic and the realities of Indigenous life.

Native American literature is not a genre itself, but rather enhances every part of the library, whether you enjoy horror, fantasy, legal thrillers, or poetry. Each book listed here fulfills the 2021 Reading Challenge prompt: read a book by a Native American/First Nations/Indigenous author.

The Removed by Brandon Hobson

In the fifteen years since their teenage son, Ray-Ray, was killed in a police shooting, the Echota family has been suspended in private grief. With the family’s annual bonfire approaching—an occasion marking both the Cherokee National Holiday and Ray-Ray’s death, and a rare moment in which they openly talk about his memory—Maria attempts to call the family together from their physical and emotional distances once more. But as the bonfire draws near, each of them feels a strange blurring of the boundary between normal life and the spirit world. Drawing deeply on Cherokee folklore, The Removed blends the real and spiritual to excavate the deep reverberations of trauma and the power of stories on both a personal and ancestral level.

Moon of the Crusted Snow by Waubgeshig Rice

With winter looming, a small northern Anishinaabe community goes dark. Cut off, people become passive and confused. Panic builds as the food supply dwindles. While the band council and a pocket of community members struggle to maintain order, an unexpected visitor arrives, escaping the crumbling society to the south. Soon after, others follow. Tensions rise and, as the months pass, so does the death toll due to sickness and despair. Guided through the chaos by an unlikely leader named Evan Whitesky, a group of young friends and their families endeavor to restore order while grappling with a grave decision.

The Heartbeat of Wounded Knee: Native America from 1890 to the Present by David Treuer

The Heartbeat of Wounded Knee is the essential, intimate story of a resilient people in a transformative era. The devastating seizures of land gave rise to increasingly sophisticated legal and political maneuvering that put the lie to the myth that Indians don’t know or care about property. The forced assimilation of their children at government-run boarding schools incubated a unifying Native identity. Conscription in the US military and the pull of urban life brought Indians into the mainstream and modern times, even as it steered the emerging shape of self-rule and spawned a new generation of resistance.

Place a Hold | Read with Libby | Listen with Libby

Kali Fajardo-Anstine’s magnetic story collection breathes life into her Latina characters of indigenous ancestry and the land they inhabit. Set against the remarkable backdrop of Denver, Colorado–a place that is as fierce as it is exquisite–these women navigate the land the way they navigate their lives: with caution, grace, and quiet force. Sabrina & Corina is a moving narrative of unrelenting feminine power and an exploration of the universal experiences of abandonment, heritage, and an eternal sense of home.

Virgil Wounded Horse is the local enforcer on the Rosebud Indian Reservation in South Dakota.  When justice is denied by the American legal system or the tribal council, Virgil is hired to deliver his own punishment, the kind that’s hard to forget. But when heroin makes its way into the reservation and finds Virgil’s nephew, his vigilantism suddenly becomes personal. As Virgil starts to link the pieces together, he must face his own demons and reclaim his Native identity. He realizes that being a Native American in the twenty-first century comes at an incredible cost.

It’s 1974 in the Cherokee Nation of Oklahoma and fifteen-year-old Justine grows up in a family of tough, complicated, and loyal women, presided over by her mother, Lula, and Granny. After Justine’s father abandoned the family, Lula became a devout member of the Holiness Church – a community that Justine at times finds stifling and terrifying. But Justine does her best as a devoted daughter, until an act of violence sends her on a different path forever. Crooked Hallelujah tells the stories of Justine–a mixed-blood Cherokee woman– and her daughter, Reney, as they move from Eastern Oklahoma’s Indian Country in the hopes of starting a new, more stable life in Texas amid the oil bust of the 1980s. However, life in Texas isn’t easy, and Reney feels unmoored from her family in Indian Country.

There There by Tommy Orange

This wondrous and shattering novel follows 12 characters from Native communities: all traveling to the Big Oakland Powwow, all connected to one another in ways they may not yet realize. Among them is Jacquie Red Feather, newly sober and trying to make it back to the family she left behind. Dene Oxendene, pulling his life together after his uncle’s death and working at the powwow to honor his memory. Fourteen-year-old Orvil, coming to perform traditional dance for the very first time. Together, this chorus of voices tells of the plight of the urban Native American–grappling with a complex and painful history, with an inheritance of beauty and spirituality, with communion and sacrifice and heroism.

Place a Hold | Read with Libby | Listen with Libby

Set on and around a North Dakota Ojibwe reservation, Love Medicine is the epic story about the intertwined fates of two families: the Kashpaws and the Lamartines. With astonishing virtuosity, each chapter draws on a range of voices to limn its tales. Black humor mingles with magic, injustice bleeds into betrayal, and through it all, bonds of love and family marry the elements into a tightly woven whole that pulses with the drama of life. Filled with humor, magic, injustice and betrayal, Erdrich blends family love and loyalty in a stunning work of dramatic fiction.

Born in a bathtub in 1954 to a Cherokee father and white mother, Betty is the sixth of eight siblings. The world they inhabit is one of poverty and violence–both from outside the family, and also, devastatingly, from within. The lush landscape, rich with birdsong, wild fruit, and blazing stars, becomes a kind of refuge for Betty, but when her family’s darkest secrets are brought to light, she has no choice but to reckon with the brutal history hiding in the hills, as well as the heart-wrenching cruelties and incredible characters she encounters in her rural town of Breathed, Ohio.

Place a Hold | Read with Libby

The Seed Keeper by Diane Wilson

Rosalie Iron Wing has grown up in the woods with her father, Ray, a former science teacher who tells her stories of plants, of the stars, of the origins of the Dakota people. Until, one morning, Ray doesn’t return from checking his traps. Told she has no family, Rosalie is sent to live with a foster family in nearby Mankato. Many years later, Rosalie returns to her childhood home. A widow and mother, she has spent the previous two decades on her white husband’s farm, finding solace in her garden even as the farm is threatened first by drought and then by a predatory chemical company. Now, grieving, Rosalie begins to confront the past, on a search for family, identity, and a community where she can finally belong.

The Only Good Indians by Stephen Graham Jones

Seamlessly blending classic horror and a dramatic narrative with sharp social commentary, The Only Good Indians follows four American Indian men after a disturbing event from their youth puts them in a desperate struggle for their lives. Tracked by an entity bent on revenge, these childhood friends are helpless as the culture and traditions they left behind catch up to them in a violent, vengeful way.

All book descriptions were borrowed from Goodreads.com.

One thought on “2021 Reading Challenge: Read a book by a Native American/First Nations/Indigenous author.”